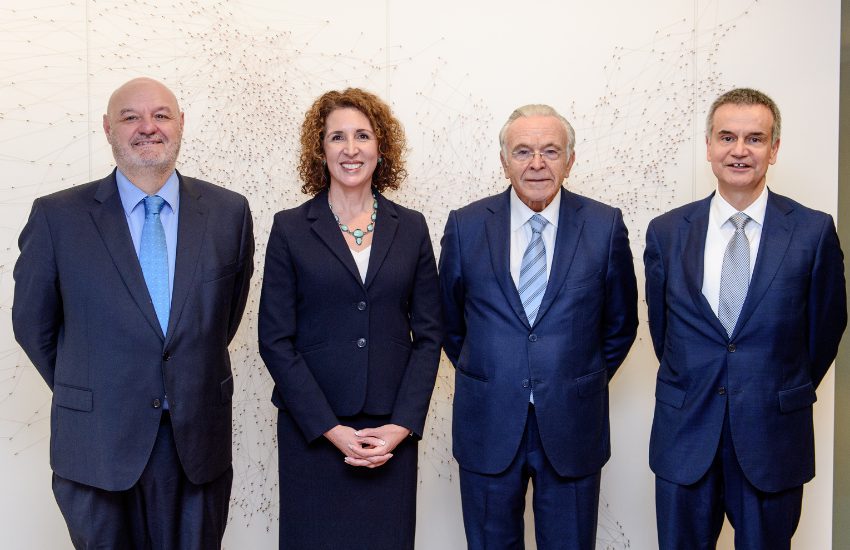 Isidro Fainé, President of the World Savings and Retail Banking Institute (WSBI), and José María Méndez, CEO of CECA, met with Rebeca Romero, President and CEO of the Independent Community Bankers of America (ICBA), to explore the best ways of accessing financial services in underpopulated areas

Isidro Fainé, President of WSBI, CECA and "la Caixa" Banking Foundation, and José María Méndez, CEO of CECA, met with Rebeca Romero, President and CEO of the Independent Community Bankers of America (ICBA) at this institution's headquarters in Washington.

The meeting reflected on the best solutions for providing access points to banking services in areas with a very low population density, where it is necessary to combine the advantages of digital channels and the proximity of a physical presence. In particular, the experiences of implementing this type of solution on both sides of the Atlantic, such as mobile offices or cash in shop, were shared. These types of exchanges are very useful for the implementation and monitoring of the recent roadmap adopted by the three banking associations (AEB, Unacc and CECA) to reinforce financial inclusion in rural areas.

Another issue addressed at the meeting was the importance of sustainable finance. Rebeca Romero expressed her interest in the progress made in the development of the European taxonomy given the potential influence it could have on the classification of activities on a global level.

Furthermore, the role of banking in an environment of high inflation and market volatility was discussed, as well as measures to support vulnerable groups.

"It was an honour to get together and discuss the unparalleled role of community banks in the US economy," said Rebeca Romero. "I appreciate the opportunity to learn more about WSBI's commitment and innovation efforts and how we can learn from and support each other in our common goal: building prosperous communities. It was an enlightening and productive conversation that reaffirmed the power of community banks," explained the ICBA president.

The World Savings and Retail Banking Institute, chaired by Isidro Fainé and with CECA among its main members, was established in 1924 and represents more than 6,000 savings and retail banks from around the world with total assets of USD 15.6 trillion and serving nearly 2 billion customers, offering financial services mainly to SMEs and families.