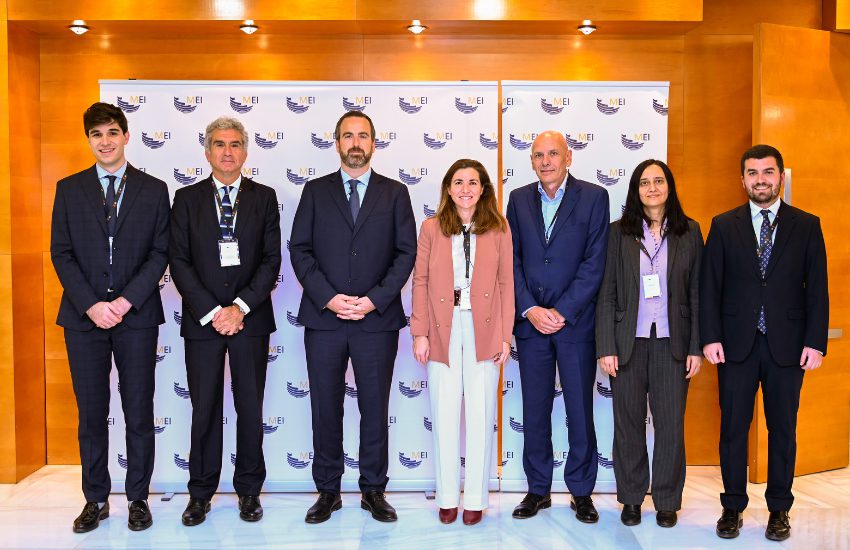 The opening ceremony of MEI 2022, a conference organised by Model of Economic Institutions, a non-profit association made up of university students, took place yesterday. The conference, which will be held in Madrid from 14 to 18 November, aims to foster knowledge of the economy and international financial institutions among the university community, promoting the creation of an informed, multidisciplinary society committed to the future.

More than 150 participants - Spanish, European and international university students - attend the conference to defend the position of their respective delegations regarding issues that deal with current affairs such as cryptocurrencies, tax havens or measures to tackle inflation in the main international export products.

The inauguration of the event, which commenced yesterday with the acceptance of accreditations and the opening ceremony, took place at CECA's head office. In attendance were Álvaro López Barceló, Director of the Treasury and Financial Policy; Fernando Conlledo, CECA General Secretary; Jaime Herrero, general vicesecretary of the Banco de España; María Abascal, Managing Director of the AEB (Spanish Banking Association); and Pilar Barrios, partner at AFI Escuela; on behalf of MEI's partner organisations.

The opening ceremony, moderated by Carolina Tani, Press Director of MEI 2022, featured a keynote address by Álvaro López Barceló. The Director of the Treasury and Financial Policy introduced the event by stressing the importance of "remaining vigilant in the face of the main challenges arising from the complicated geopolitical situation, as well as inflation in the euro area". Speaking after him was Manuel Moreno, Director General of MEI, followed by Fernando Conlledo, CECA General Secretary, who said: "Initiatives such as MEI bring financial knowledge closer to young people. Education is key to the future of any society, it is important for young people to acquire formal knowledge that will enable them to make appropriate decisions. For the CECA sector, financial education is a priority, a tool that helps to improve people's lives and bring about equal opportunities."

In turn, María Abascal, Managing Director of the AEB (Spanish Banking Association), commented that "the AEB has been committed for years to financial and digital education. Our Association and the banks make available to all citizens various training programmes such as 'Your Finances, Your Future' and Expertclick."

Afterwards, Pilar Barrios spoke on behalf of Afi Escuela and added that "Afi Escuela has been providing training that goes beyond the economic-financial fields for more than 28 years, also providing training in technology and sustainability as key areas. Therefore, both because of the vocation of Afi Escuela and because of the relevance and importance of the subject, it is of the utmost interest."

Lastly, Javier Flores, Secretary General of MEI, and Irene Barreiro, Director of Academics, both expressed their enthusiasm for the project.

After the opening session, two MEI Forums - one in English and the other in Spanish - were organised in the form of round tables in which experts and professionals from the world of institutional finance shared their knowledge with the young participants of MEI 2022. This year's topics were: Is Infinite Economic Growth on a Finite Planet Possible? and Challenges of an uncertain future: inflation, public debt and pensions. Impact on future generations.

The debate sessions will take place on 15, 16 and 17 of November at AFI Escuela and the closing ceremony will be held on 18 November at the Bank of Spain.

This is the second edition of the MEI event, which has grown to embrace more students interested in exploring the various social, demographic, political and cultural challenges of our time. In addition, French has been added this year as an official language alongside Spanish and English.